Hi all this will be my mini project like the title says until I find my Foxbody for the 4.3 turbo build. This is my 94 mustang 3.8 auto I found for $600 that came with a unknown condition 2000 mustang 3.8 intake to oil pan engine and 4R70W attached transmission. I have started the process of tearing down the engine from the 2000 mustang to see why it won’t turn but so far but have halted on that since it’s a nice day here and just going to get the 94 mustang drivable. I know there is something messed up with the transmission cable because the person I got it from said they drove it around the block at one time after a engine swap and is a well trusted person. Also need to fix a bunch of rigged up mess that it’s got goin on, a trans cooler line leaking and some tlc. Also has a engine miss wish could be a number of things because the motor came from a 96 thunderbird and see a bunch of unplugged connections. I might go ahead and do a Windstar splitport Swap on this one also just to have something to mess with after I check out the heads and intake from the 2000 mustang. Y’all can let me know what u think.

That looks like a fairly sizable project in itself. From your handle, it looks like you've done a 4.3L before.

I've collected the parts for same (minus some small items) and will be starting a N/A 4.3L in the near future.

Lonnie-S said:
That looks like a fairly sizable project in itself. From your handle, it looks like you've done a 4.3L before.

I've collected the parts for same (minus some small items) and will be starting a N/A 4.3L in the near future.

Nah I haven’t done a 4.3 yet that is the car that I am going to build but instead of a supercharged car it’s going to be turbo. Up until 2015 when I built my 95 M90 swapped mustang I have only messed with v8 car but have now got really attached to the sixers. I look forward to seeing to seeing your build also.
8 Well for the 1st time getting to see under the car it was more rigging. Come to find out I must’ve misunderstood who I got the car from he had hired someone to change the engine and they had obviously done some stuff to the tranny because they couldn’t figure out why they couldn’t get it into park and could only get reverse and neutral. It was because they rigged the shifter cable to the shift lever, had no bushing whatsoever, and a ton of slack, and the nut was just nearly off. So after a bunch of work and trying not to mess the bushing and stuff off of the 4R70w trans I got, I got it on and went threw the gears they work real well but I still didn’t fix the leaking trans from the cooler in the radiator so maybe I will get to do that tomorrow drive it around the block, and figure out the running rich and engine not running just right. It also has a tail housing seal leaking. I almost want to take the tranny out after seeing the rigging today though. The pic is after I got the right pieces on.

I love this kind of stuff please post more
8

I figured someone would lol. I’m the same way. For the longest I just watched the Forums just following people tinkering with stuff, and I have never posted anything til this Forum. I might be real slow putting stuff up and working on my stuff but as long as people wants to see it I will. I will go out and post some pictures from what yesterday and last night. I did in a little bit before I go into work.
8 Got to mess with the car some today before work and figured out my big miss the engine had the other day, and can’t believe it the computer was able even make it run as good as it did for as long as it did before it started missing so bad. The Cam sensor was unplugged I know I should have dug deeper when I seen all the rigged up stuff and I should have not drove it when I read the codes the other day off of my SCT x3 because one was a “PO340 camshaft position sensor A circuit (Bank 1 or single sensor” that did come back even when I cleared it. I was just wanting to drive it after getting the trans cable situated. I didn’t have time to get the coil pack off to see if it still has the 96 thunderbird sensor in it (which it prob does the reason it’s not plugged up) and I did get more of the 2000 motor tore apart and it spins free, had a lot of gunk in the water pump that wasn’t letting it turn I guess? Got one of the piston and rods out looks good and still has crosshatch in the cylinder bore.
8

Just as I suspected.
8 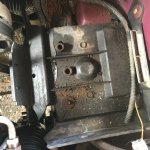 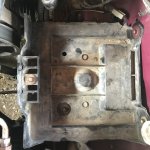 Camshaft sensor didn’t come in till the later afternoon so I will have to put it on tomorrow. I had found some Bar’s block seal in the trunk of the mustang and just hoping that it was for the old engine that was in the mustang, goin to do a good coolant flush for sure now because I seen the copper color when I popped the radiator cap also. I put a better condition battery tray that I had from a previous car on and cleaned some of my mess up in the shed.
8

So I went to put the cam sensor on today and wasn’t even thinking about the camshaft synchronizer shaft being different so needless to say I didn’t get the car running. I went back to the guy I got my mustang from and he let me get one off of another 94 that he had there. So a lot of people already know this but the 94-95 use a different camshaft synchronizer for future reference. And this motor in my car come from a 96 thunderbird so it was the 96 and later different one also. I got the alignment tool and put the other sensor in that I got but after taking all the plugs out and retiming the car (which I hope I have right) I ran out of time before work so maybe tomorrow.
8

I finished the cam sensor install so that code is gone, so one more code off my list. I gotta work on getting the EVAP stuff from a doner car to get that one gone. The miss is still there and I’m thinking it’s coming from the EGR pipe that goes down to the header wasn’t tightened good because it didn’t do this til I drove it around the block, and after I got it loosened from the EGR on the top side it was loose at the header but I ran out of time and will be Sunday before I can mess with it anymore.
Last edited: Aug 10, 2018
8

I have been messing with the car some on and off in between switching to day shift from nights, I rotate shifts every 2 weeks and the 1st week of the swap I’m usually dead tired and motivation is gone when I get home from my commute, and been working on it some on the weekends so I figured I would give a update for those that is watching the thread. The car is running and all my codes are clear but the EVAP code I gotta get that stuff back on. I can crank the car and fires right up but something still ain’t right. I think it might be the fact that the motor came from the 96 thunderbird and maybe have different cam timing. I just got to look into it more. I know the 96-98 mustang cam sensor has different timing to where it’s set on the balancer from what I have read, and I set the timing with a tool and 26 degrees ATDC on compression stroke just like I was supposed too but on the 96-98 I think it was 10 degrees ATDC. It clears up in the upper rpm when you rev the engine is the reason I’m thinking that’s the problem but got to get another data log now that the connector has power again. The dust shield is also hitting so I got to fix that too. I started doing some data logging and no sooner than I did I lost power to the data link connector. The car had a alarm system that wasn’t working and some of the wires clearly haven’t been hooked up in a while so I pulled all that mess out. It had to do with the data link connector problem too. It does have a time when it is running you can hear some motor noise (maybe some valve train but sounds more lower like timing chain)and it starts missing real bad but stops after a bit. Then there is a time that it will be idling some what ok then sounds like a bad exhaust leak coming from behind the engine so I got to figure out. I’m torn between what I want to do at this point because the car was bought in the 1st place as a parts car for my Foxbody build but kinda got interested in making it a driver or at least doing a splitport/Windstar Swap? I don’t know. Ideas or suggestions? feel free to post. So that’s where I’m at and maybe the weekend I will get to work on it, datalog more, check fuel pressure and stuff while I log, get some carb cleaner spray around the intake to check for vacuum leaks and common stuff and dig deeper.
You must log in or register to reply here.